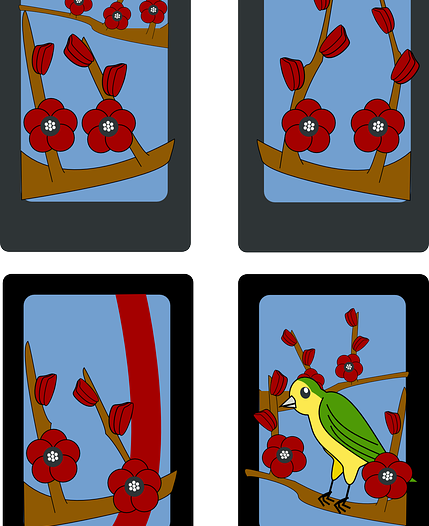 If you’re visiting or planning to study in Japan, you have to be aware that the locals love playing card games. One of the more popular games is Koi koi using Hanafuda cards. In this article, we will discuss how to play and bet on koi-koi using hanafuda cards. Before we go into detail about how to play and bet on koi-koi, we must first discuss the cards.

Hanafuda is a deck of cards used by the Japanese. It is much smaller than a regular Western playing card but is somewhat thicker. That’s why the cards don’t bend. Instead, they create a solid snapping sound. Since they are thicker than regular playing cards, shuffling them can be rather tricky.

Trivia: When you buy Hanafuda cards, you might receive the deck enclosed in a Nintendo box. Nintendo did not start with Dokey Kong. In 1889, Nintendo was in the business of producing hanafuda cards.

Hanafuda used to be a means for the locals to engage in gambling. But, pachinko has since replaced hanafuda cards in terms of gaming. However, the cards remain widely used in Japan.

The cards contain 12 different suits that correspond to each month of the year. Each suit has four cards, which come with different point values. A flower or a plant often represents the suit. In general, the hanafuda has two or three standard cards in each suit. It is called “Kasu” or junk. Since they are normal, they come with a lower point value. There are also mid-level point cards, which feature red and blue poetry ribbons, animals and birds. They carry more points than the normal ones. The poetry ribbon cards are called “Tan” while the animal cards are “Tane.” Special cards, called the “Hikarifuda,” carry a high point value.

The following are the suit of the hanafuda cards:

It has: One Normal, the Willow and Red Lightning (1 point), and three Specials: Red Ribbon (5 points), Swallow/”Tsubame” つばめ (10 points), and Ono no Michikaze/”Rainman” 小野道風 (おののみちかぜ) (20 points)

How to Play and Bet on Koi Koi

Now that you have an idea about hanafuda cards, it is time to learn how to play and bet on koi-koi.

Played by two players, koi-koi is often considered as the Japanese poker. The game also has a dealer who deals the cards this way:

During this time, the other player can ask to play the dealer’s hand. Should such a request be made, the players then swap their hands.

Before proceeding with the play of koi-koi, both players must check the face-up cards if:

The cards on hand must also be checked for instant wins:

Like in every card game, each player takes a turn, which follows two actions:

How to Bet on Koi-Koi

Betting on koi-koi can be done similarly with other card games, such as Rummy where the amount of winnings depends on the points scored during the game. This is the reason why some player chooses to play koi-koi instead of stopping when they get a yaku. More points mean more winnings. Now that you know how to play and bet on koi-koi, it's time to look for someone to play against!