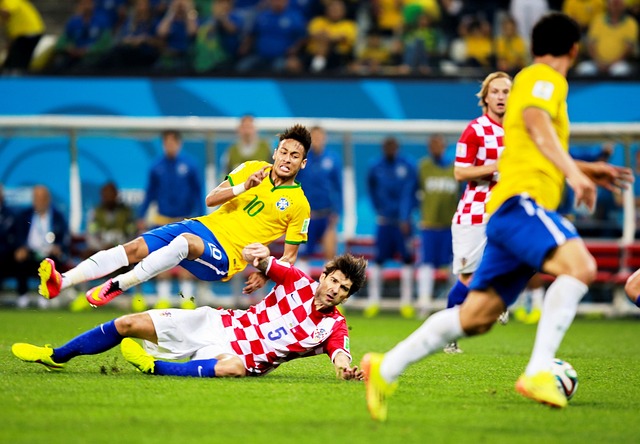 The FIFA World Cup is a popular sporting tournament in the world. Fans of participating countries go all-out every time they qualify for this special event. Professional soccer players also undergo intensive training and gaming experiences to join the FIFA World Cup.

Soccer games are exciting to watch because of their fast-paced action and difficulty in scoring. During a game, there are many calls and violations that officials should watch out for to keep the game fair and balanced. The seriousness and dedication of the whole team make the game even more intense.

The FIFA World Cup features strong teams worldwide that went through challenging qualifying rounds. Emerging teams would create favourable odds of winning against weaker opponents. But the sporting world also has shocking events, such as the biggest upsets in the FIFA World Cup. Here are some of them:

FIFA (Federation Internationale de Football Association) was founded in 1904 by a group of European countries: Belgium, the Netherlands, Sweden, France, Denmark, Spain, and Switzerland. The organization formed the game's rules to implement in organized and international competitions, but they still needed to learn first that they would host the World Cup events.

The global competition for soccer games began to grow since the first international games were held. But, the Olympic Football competitions are already ongoing every four years. The tense build-up between the International Olympic Committee and FIFA grew due to the status of amateur athletes. FIFA chose to host their international matches, which allowed national teams to recruit local professional club players.

The organization created teams worldwide that showcased great talents that could almost win any game. They also have the biggest upsets that amaze many people.

The match between the USA and England in 1950 was one of the most popular and biggest upsets in the history of the FIFA World Cup. England joined in any World Cup event in 1950 because of their arrogance over their association with the organization. They eventually joined the group with Chile, the United States, and Spain, which became favourites that would advance to the event's next stage.

The Americans showed up at the match and played against England though they only scored a goal in the last minute of the first half with Joseph Gaetjens' shot. Brazilian fans chose to back the Unites States when they received the news that the Americans were leading at halftime.

During the match, the crowd cheered for the Americans, who played good defense against several attacks before the end of regulation. It was an exciting match that led to one of the biggest upsets in history.

During the tournament, only one American journalist travelled to Brazil to cover the event with his own money because his newspaper did not pay for his trip. Football did not catch on, and the United States would only participate in another World Cup once they became hosts in 1994 since they had one of the tournament’s biggest upsets.

DPR Korea (Democratic People's Republic of Korea) debuted in the FIFA World Cup in 1996 and delivered one of the biggest upsets in history. They were known for their lack of experience because of their low development of football infrastructure, which was why they had difficulty dealing with the other Group 4 in the 1996 FIFA World Cup.

The DPR Korea faced the Soviet Union in their opening match, and they were defeated. They had a draw with Chile that forced an essential match against Italy, who were two-time champions.

Their match against Italy was an opportunity for them to showcase their talents in football. They played with a disciplined and defensive performance against Italy.

Their gameplay reflected their military training, which made the Italians scoreless in their match. Their only goal was Pak Doo-ik's score, which also made more English fans cheer for them and had one of the biggest upsets in FIFA World Cup tournaments.

The English fans were impressed with DPR Korea's performance, whereas the people of Middlesbrough welcomed the team after their victory. The locals hosted a victory celebration for the team because of their remarkable journey at the FIFA World Cup. They were the first Asian team to reach the quarterfinals of the tournament.

The participants of the 1982 FIFA World Cup didn't think that team Algeria was a threat in the tournament, especially West Germany, who were loud about their insults about their match.

They made fun of how they would easily score goals against the Algerians, with dedication on their 7th goal to their wives while their eighth goal would be for their dogs.

Algeria planned precision attacks and implemented quick plays to pressure the Germans, which was the key to having one of the tournament’s biggest upsets. Rabah Madjer's goal gave them the lead before Karl Heinz Remmenigge tied the score. The tied score gave Germany and their fans the impression of getting the win quickly, but the Algerians managed to pull off a play for Lakhdar Belloumi, who delivered their winning goal.

The result of the match shocked the sporting industry, but the Germans gave them an unsportsmanlike and dirty response. During West Germany's final group match against Austria, the Germans need one win, and the Austrians must not lose with more than one goal to advance. Unfortunately, this sequence eliminated Algeria from the competition.

Senegal is a well-known football nation today, and they have star players coming that come from top leagues from around the world. But during the 2002 FIFA World Cup, the African Cup of Nations champions needed an opportunity to beat France, and they had one of the World Cup’s biggest upsets. The defending Euro and World Cup champions had a strong roster, and their group bracket seemed easy to deal with for their third major tournament victory.

During their opening match, Senegal displayed great plays that forced turnovers, and they capitalized it with good chances. They showed confidence and readiness for the current champions and eventually took the lead.

Senegal's match against France became popular at the time. France didn't advance to the next series and was eliminated with a point-goalless draw against Uruguay. Denmark and Senegal were able to move to the quarterfinals. But Senegal had an unfortunate match with Turkey, losing with a 1-0 score.

Costa Rica almost had no chance in the 2014 FIFA World Cup in Brazil when they were drawn into a supergroup that consisted of Uruguay, Italy, and England. But Costa Rica did not back down from the challenge, and they fought to fulfill their dreams. Their participation resulted in one of the tournament’s biggest upsets.

Costa Rica bravely conquered Uruguay in their opening game and defeated them with a score of 3-1 over a side. After the win, they also defeated the four-time champions Italy with a 1-0 score. Their success knocked out Italy from the group stage for their second consecutive World Cup tournament.

Costa Rica increased their confidence and became a formidable contender until it reached the semifinals. Unfortunately, they lost their last eight because of the penalties they received during their match with the Netherlands.

The FIFA World Cup in 2022 witnessed one of history's biggest upsets. Argentina was a power team alongside Brazil, and they came in as favourites when they arrived in Qatar.

Argentina was the Copa America champions and known for playing physically, with excellent defense skills by Lionel Scaloni and powerful attackers such as Lautauro Martinez, Angel Di Maria, and Lionel Messi.

A different story went on when they faced the less-favoured Saudi Arabia. During their game, Messi converted an early penalty against Saudi Arabia and took the lead. It made the team feel comfortable, and their confidence was high.

Three goals were disallowed for offside, and it took their concentration away from the game in the second half. Saudi Arabia took advantage of equalizing the score and took the lead.

Saudi Arabia performed a great game against Argentina, and this match was one of the biggest upsets in the record books.

FIFA World Cup hosts the biggest football tournament, and the most potent teams worldwide show up to compete. Some nations invest heavily in professional football and create groups to win the championship. Some teams seem unbeatable and would dominate significant world leagues.

Like other sports tournaments, the FIFA World Cup has its biggest upsets. Even if the strong teams prepare for the tournament, there are still full of surprises with unexpected results like placing bets and winning some big money. Football is fun to watch; the excitement grows with these biggest upsets in history.