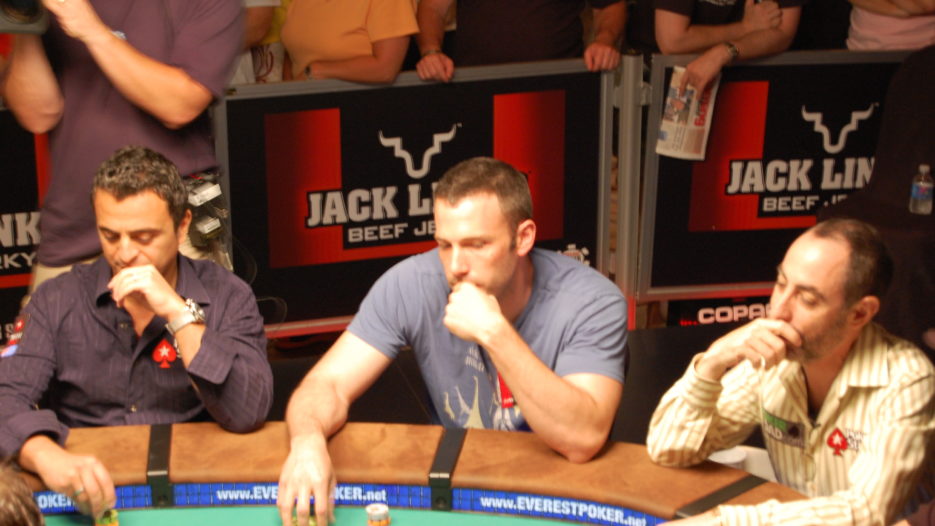 Poker is like a universal language that brings together people. It has evolved from being a source of entertainment to a form of sport that we play with friends, through online casinos, and during tournaments. There are professional poker players that became household names and then there are already famous people who found themselves enjoying this game. In a country where gambling is rampant, watching celebrities play poker is a treat in itself.

Looks like Spiderman actor Tobey Maguire wanted to test his spider sense on the felt. He is actually an extremely tough opponent at the table since he started playing poker in 2004. He was, in fact, quite successful in both live and online poker.

Interestingly, though, reports have been circling around the poker industry that the famous actor would not play poker without his Shuffle Master. Costing about $17,000, Shuffle Master is believed to create a random and fair shuffle. It can also speed up the game. Maybe spidey wanted to score a big win first before saving the world, eh?

Ben Affleck starred as Batman – a crime-fighting vigilante but he is also known for being a decent poker player. Much like his Oscar-winning movies, Ben is known for being a good-natured poker opponent. The Good Will Hunting star used to play Blackjack but was banned because he was allegedly reading the cards. Affleck received his poker lessons from professional players Amir Vahedi and Annie Duke. His prowess in the felt has earned him $500,000 in live tournaments. His biggest win was the 2004 California State Poker Championship where he took home $356,400.

Affleck is known for having a preference for playing against film producers and co-actors. It has been reported that they often have poker nights in private villas and engage in cash games with a pretty hefty buy-in amount of $50,000 to $100,000. Well, it’s probably quite easy for them to shell out that amount of cash for their entertainment considering how much they are earning.

The American Pie star Shannon Elizabeth has made quite a name for herself in the poker industry. She finished third in the 2007 NBC National Heads-Up Poker Championship. She admitted to being more than a leisure poker player, claiming to visit Vegas at least thrice a month to join in live cash games. Whilst she is not as active as before, the model/actress is one of the best celebrity pokers with total live earnings of $235,866 and best cash win of $125,000.

Matt Damon, just like his good friend Ben Affleck, is a huge poker fan. The award-winning actor who starred in the 1998 movie Rounders – a great poker film, by the way – spent $25,000 to play in a poker tournament just to get the experience he needs to play the role. The film has inspired a good number of viewers to try their hand on poker, including Matt Damon himself. Since the film, the actor has joined several poker tournaments. Whilst he still has to improve his poker chops, he did a pretty awesome job during the 2008 and 2019 WSOP events.

Jennifer Tilly is not only popular for her movies, as she is also an amazing poker player. In fact, she has a WSOP bracelet after bagging the 2005 Ladies Event win. The Family Guy star has also won the WPT Ladies Night Invitational and Bellagio Cup. Tilly also loves joining high stakes cash games.

In 2005, Tilly mentioned that she even contemplated on pursuing her poker career more than acting. She prematurely retired from poker in 2008 but went back to playing in 2010. Tilly, whose boyfriend is professional poker player Phil Laak, was nominated for PokerListing’s Spirit of Poker Living Legend Award in 2014. She currently has live tournament winnings of $992,501.

Aside from tennis, Rafael Nadal is also a big fan of poker. The tennis champion was signed by PokerStars and played against poker giants such as Daniel Negreanu. However, his prowess with a tennis racket did not translate to the cards as he is yet to win any tournaments as of late.

The Notebook’s director Nick Cassavetes is also one of the celebrities who find poker an addicting game. He might have not won any awards but he has had some few successes on the table. He had some pretty good finishes and cashes in WPT and WSOP, where he won $77,000. He previously participated in GSN’s High Stakes Poker and PokerStars’ The Big Game.

Michael Phelps is one of the greatest athletes of all time having won 28 Olympic medals. He credits most of his poker knowledge from Jeff Gross, a professional poker player and his house mate in Baltimore. Since Phelps has retired from professional swimming, many are anticipating whether he would spend more time playing in poker tournaments. He might have not finished first in any events, but his best win was a 5th place finish in a No-Limit Hold’em tournament in the 2008 Caesars Palace Classic.

A highly successful actor and stand-up comedian, Kevin Hart is also a big poker fan, surprising a lot of poker enthusiasts when he joined a live poker tournament in the Bahamas last 2017. A full-blooded comedian, Hart expressed his intent of uniting the world through laughter. He shared that he feels the poker industry would be a good community to start in.
Hart has a total live winning of approximately $48,000.

The Breaking Bad actor is quite an excellent poker player. He joined the LA Sunset where he played and won two matches. Paul was also featured alongside football star Cristiano Ronaldo in a poker advertisement. He had also previously joined the WSOP and several live cash games in the Bahamas.

The football star is no foreigner to poker. In fact, Pique learned to play the game from John O’Shea, Darren Fletcher, and Wes Brown during his stay at Old Trafford. He is known to join some WSOP and EPT events, despite still being an active football career. He has managed to accumulate a total of $275,640, not bad for a part-time player.

Another football celebrity who finds poker a good game to play whilst not kicking the balls on the field is Neymar. He has joined several events of both the WSOP and EPT Barcelona. His total live winning is $21,072, a pretty small amount compared with his football salary.

Before playing poker, Sheringham was a tough football player. He scored 289 goals in all of his 755 appearances. He also has three Premier League wins and FA Cup. Today, he can be seen mostly scoring big in poker circuits around London.

Only Connect’s host and writer Vicky Coren Mitchell is also a poker enthusiast. In fact, Coren Mitchell is the first woman to win an EPT event, the first player to win both a TV professional tournament (European Poker Tour London 2006), and a televised celebrity tournament (2005 Celebrity Poker Club), and the first player to win two EPT Main Events – The 2006 EPT London and the 2014 EPT Sanremo.

Coren Mitchell is a regular poker player of Texas Hold’em at the Victoria Casino in London and is also often playing in home games with friends and colleagues. She has a total live winning of $2,470,242 and a best live cash of $941, 513. Vicky Coren Mitchell is a member of the Women in Poker Hall of Fame.