Home / Japan / Where Is the Best Onsen in Japan? 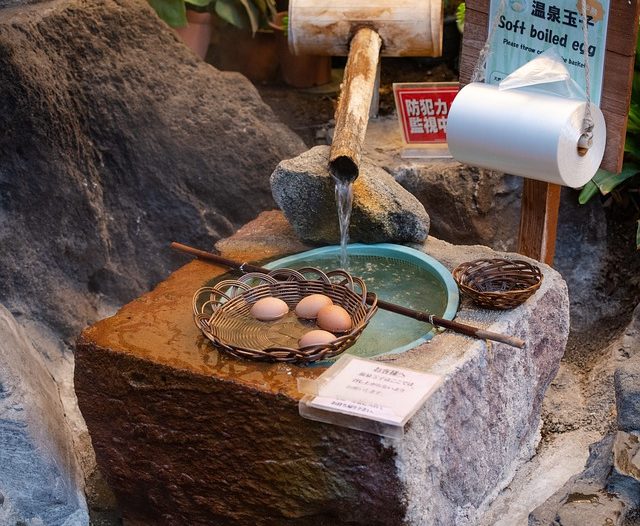 Looking for an onsen? Japan has tons where you can immerse in traditional Japanese baths.

Japan has its ways of keeping fit and healthy through various forms of relaxation. You can escape the city for a night or two in a traditional inn where you can experience authentic Japanese culture. You may also have a massage and try the shiatsu to ease all the stiff parts of your body and relieve stress.

An onsen (hot spring) is one of Japan’s most popular places to visit for relaxation. It is a natural hot spring bath which is a good therapeutic way of relaxing your body and mind. Japan is rich with natural onsen (hot springs) because it is in a volcanic location, which makes it suitable for a hot bath. Here is a list where you can choose the best Japan onsens.

Where Can I Do Onsen in Japan?

Curious to find where the top 10 best onsen in Japan is and how much is an onsen in Japan? Choose the best hot spring resort in Japan from this comprehensive list:

Kusatsu Onsen offers one of the best qualities of hot spring water in the town of Gunma. The source of its hot spring water runs on Japan's three major springs. They also feature ‘Yumomi,’ which is a cooling process of the hot water using large wood paddles. The process takes place daily for tourists, held in the Netsu No Yu bathhouse near the Yubatake. It is the best onsen in Japan near Tokyo, so they are best for a quick getaway.

If you want to experience one of Japan’s earliest hot springs, Hakone Onsen is the place to visit. It has a history of 1,200 years and features the breathtaking view of Mount Fuji. Hakone Onsen is one hour away from Tokyo and is a favourite destination for individuals who want to escape the busy megacities of the area. Plus, they are the best onsen in Japan for couples.

Yufuin is a small valley town with easy access from the express train or bus from Fukuoka city. This onsen belongs to Japan’s top onsen spots for tourists. Located in mountainous surroundings, Yufuin onsen gives its customers a great view accompanied by cafes, souvenir shops, and museums along its main street.

Kurokawa Onsen is a small but a lovely hot spring in the Kumamoto prefecture between the Mount Aso and Kuju Mountain range area. You will not see any high-rise buildings in this town and it is well-kept by people from the preservation project, which gives it an evocative experience. The Kurokawa onsen works on a system of “Nyuto Tegata,” which is a series of passes for onsen access for six months’ validity. They have 24 distinct ryokans and you may choose from three open-air baths to experience. The best in the area.

Beppu Onsen is also a famous hot spring in Oita, Japan, and it is one of the earliest hot springs in the country. Situated between the Beppu Bay and the mountains, it contains eight areas of hot springs which include Beppu, Kannawa, Myoban, Hamawaki, and Kankaiji which they call as a group “Beppu Hatto.”

Japan’s three best onsens are Kusatsu, Arima, and Gero. A 45-minute train ride from Takayama, you will find the wonderful place of Gero city. You may purchase a “Yumeguri Tegata” onsen pass that includes three entries to the ryokan’s onsen of your choice.

One of Japan’s well-known onsen resorts in Hokkaido is the Noboribetsu Onsen, in which it has a hot spring that naturally makes 10,000 tonnes of water every day. Noboribetsu Onsen creates nine different variations of spring water that contains minerals and elements such as salt, sulfur, mirabilite, aluminium, iron, melanterite, alkaline, acidic iron, and radium where the water can reach the temperatures of 45 to 90 ̊C.

At the northern Hyogo, the coast of the sea of Japan lies the Kinosaki Onsen that has seven public hot springs that they call “Sotoyu.” Locals wear the Yukata (cotton robe) when walking down the river, which adds to the town’s historical ambience. It also has a three-storey high ryokan made from wooden planks that will give you an experience you won’t forget.

Ibusuki Onsen resort is about a one-hour sightseeing train ride from Kagoshima city. The resort is at the southernmost tip of Japan and it has natural steam sand baths that are an effective way of relieving some ailments like rheumatism, neuralgia, gastrointestinal problems, and asthma.

Dogo Onsen is Japan’s oldest hot spring that has been around for 3,000 years already. Located in Matsuyama, the Dogo Onsen Honkan is a public bath built in 1894. The main building is the town’s symbol, which is a three-storey high castle-like made from wood. It also has a white heron on top of the “Shinro-kaku,” a white watchtower, that symbolizes Japan’s traditional design.

Are Hot Springs Common in Japan?

For Japanese-style baths, you can explore any town or area that offers great onsens in Japan.

Almost all prefectures in Japan have their own hot spring. In fact, are often known as The country has over 3,000 locations with hot springs, and each location has a number of various springs. Japan’s government regulates the operations of onsen, in which they require the spring water to have at least one out of nineteen specific minerals and must have a temperature of 25 ºC, or 77 ºF.

You can find hot springs in distant mountains, in the big cities, on beaches, on the cliffs, on river banks, on top of hotels, and almost everywhere in the country. If you are a more adventurous traveller, you may find wild, or untouched by onsen developers, hot spring baths that will require long difficult hikes over challenging terrains to be there.

Other onsens are in the big cities where masseuses provide professional massages for their clients. There are plenty of tubs with jacuzzis, saunas, tubs with near-freezing water, and tubs with almost boiling-hot water.

The neighbourhood baths are big contributors to society. It is where the locals bond, exchange views, and express kindness. Private rooms with hot springs for couples, families, or groups of friends are also available. The “kazokuburu” are reserved hot springs for families who want to have a private bonding moment, but they are more expensive.

How Much Is an Onsen in Japan?

If you can’t find the best onsen in Japan that allow tattoos, you may still enjoy via downloading these mobile games:

Onsen Musume is a multimedia project game composed of five female idol groups that promote the onsen culture of the Japanese people. This app invites its users to walk around with the use of location-based services.

A mobile mahjong game that lets you play onsen with different pretty girls from an onsen hostel. Welcome to Onsen Mahjong is ready for download in Google Play and requires an Android system version 4.0.3.+.

Hot Springs Story will let you build your resort and a chance to manage it towards success. You may include restaurants, arcades, and baths in which you should strategically position to attract your guests to try the hot spring Nirvana and boost your business to popularity. You can also design your Japanese landscape from pine trees, azaleas, and lanterns to add attraction and lure novelists and VIPs.

This app is all about running an onsen business, developed and published by Kairosoft for iOS, Android, and the Nintendo Switch. The Hot Springs Story received positive reviews from critics, making it one of the best onsen apps to download.

Toro and Friends: Onsen Town mobile game lets players help the main character of the game, a white cat named Toro, as he tries everything to fulfil his dream of becoming human. The game features match-three puzzles with an exciting storyline and generous rewards.

No part of this article may be reproduced without permission. All Rights Reserved. For more updates about travel, betting, and all things Japan, follow us.

Everything You Need to Know About Olympic Betting
read more
Yuna TanakaJanuary 31, 2020
Table of Contents Difference Between Summer Olympics and Winter OlympicsOlympic ...