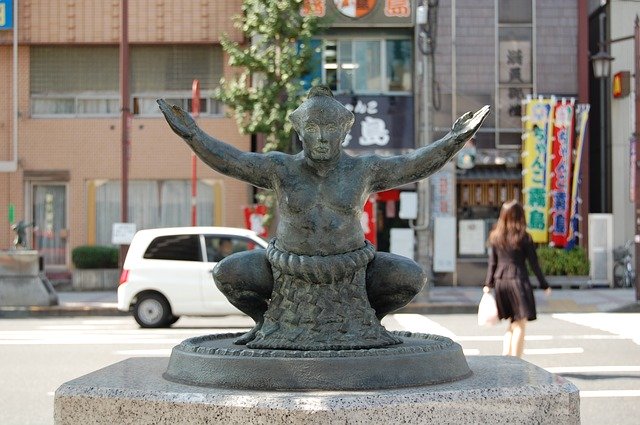 Sumo wrestling is the official national sport of Japan. People consider it as a modern Japanese martial art, that's why there are famous sumo wrestlers that locals praise for their disciple and grit. The beginnings of sumo date back many centuries ago, when the competition preserved the way of the ancient Shinto traditions. A Shinto is a Japanese ethnic religion, where its elements remain an essential part of sumo wrestling. The sport elevated some contenders to be famous sumo wrestlers and achieve celebrity status.

Sumo is a sport in Japan where fans still enjoy watching. The rules can be intricate, mainly when it comes to rankings. Honbasho is the official tournament of the competition with different ranks and divisions of famous sumo wrestlers.

Sumo wrestlers, also known as ‘rikishi,’ are split into six different divisions, based on their achievements. If they perform well in competitions, they can get a promotion to higher ranks, and the same goes for their income too. There is also a hierarchical categorization within the divisions. The ‘Yokozuna’ is the most respected title and the highest rank in the makuuchi division.

This is the lowest division where sumo wrestlers can start their careers, with at least one participation in a maezumo bout. This division consists of young aspirants who are still building their careers to be a professional sumo wrestler. Skilled wrestlers are also susceptible to drop from the higher ranks, usually from elimination from tournaments because of extended duration of injury or illness.

The best wrestlers with experience will move to the Jonidan rank. This division is the largest among the six because of a no-cap policy on the number of wrestlers. The no-cap system leads to an overcrowded situation. The hazing and some limitations on clothing are some of the issues that this division is trying to fix. Sumo wrestlers in the jonidan ranks are not allowed to wear ‘haori’ (a kimono jacket), even in winter, while the professional sumo wrestlers are in compulsory wear of their traditional Japanese dress, even when not in the ring.

The sumo wrestlers in this division are still not considered professionals. Nevertheless, instead, they earn their small allowance with each tournament in the trade of doing chores at the stable, and this gives a wrestler a total of 2,000 USD and additional prize money for successful bouts. The sandanme division has a200 total wrestlers cap.

The makushita division is considered the border between an unranked wrestler, to the reputable sekitori (all ranks beyond makushita). Sumo wrestlers that are already in the higher ranks usually fall to the makushita division, which is truly a miserable providence for them. They will have to deal with a small bi-monthly allowance and doing their chores around the training stable. The makushita division and the other lower ranks participate only seven times in a tournament. But winning all seven bouts as a makushita-ranked sumo wrestler will promote you to juryo, which is the next highest rank.

A sumo wrestler who moves to juryo ranking is considered a professional contender. Wrestlers turn to be a sekitori if they reach the juryo and makuuchi divisions already. They have an average of one million yen or 8,800 USD as their monthly salary for being a professional sekitori. Juryo-ranked wrestlers have 15 bouts per tournament, unlike the lower ranks with seven matches.

The pinnacle of all sumo wrestling divisions and the desire of all professional sumo wrestlers. The titleholders or san’yaku belong to this ranking. The yokozuna is at the top rank, next is ozeki, sekiwake, and komusubi. This division has a 42-member cap, and they allow more than one wrestler to earn multiple titles at a time. Makuuchi-ranked wrestlers receive a generous amount as their salary and fame throughout the country with the regular television broadcast of their bouts.

Taiho is famous for being a legend in Japan in which locals consider him to be the greatest sumo wrestler in history. He became a yokozuna at the age of 21 and held the reputation of winning 45 successive bouts in the years 1968 and 1969.

Chiyonofuji lacked in size by sumo standards as he only weighed in at 120 kilograms (260 lbs). He continued to pursue his career, as he used his techniques with remarkable throw moves and a mighty left-hand grip that fans and commentators call it the “death grip.” Chiyonofuji’s “death grip” made him one of the most successful and amusing wrestlers in the sport. He continued his passion for sumo wrestling by opening his sumo stable after retiring. Chiyonofuji passed away in the year 2016, losing his battle against pancreatic cancer.

This sumo wrestler went a little extreme for his passion for being a professional contender. He was inadequate to join the Sumo Association for failing the height standards of sumo wrestling. Mainoumi persuaded a doctor to administer silicone into his scalp to make him taller by a few centimeters. With his relatively small physical makeup, he went up against bigger opponents, over twice his size, making him recognized in the industry. The Sumo Association would change the height requirements to suppress other wrestlers from attempting to imitate the way Mainoumi did to qualify.

In the 1930s, Futabayama had a winning streak of 69 bouts, which made him the record holder for consecutive matches won. Many sumo fans believe that Futabayama’s record is unbeatable.

Mitoizumi is famous in the industry as the “Salt Shaker,” which he earned because of his ritual before each bout, throwing large amounts of purifying salt onto the ring. The routine gave much amusement to all sumo fans.

Takamisakari is famous for his unique personality and his warm-up customs, making him a celebrity in the sumo community. He is also famous as the “Robocop,” and “Mr. Roboto,” and his warm-ups are as entertaining as of the American professional wrestling.

Yamamotoyama is the most massive Japanese-born sumo wrestler in history, weighing in at 265 kilograms (584 lbs). He is also the heaviest Japanese in the history of the world. Yamamotoyama involved himself in a match-fixing affair, which the Sumo Association forcefully made him retire in 2011.

Akebono is a native of Hawaii, born and raised there with a planned career in hotel management. A family friend made him acquainted with a famous and respected sumo stable owner. Akebono then joined the sumo stable, and he quickly climbed up the ranks to become the first non-Japanese-born wrestler to reach the yokozuna rank.

Hakuho is from Ulaanbaatar, Mongolia, who is famous for his strength and expertise to foresee his opponents’ next moves. He is the record holder for the most wins in a year, with 86 wins out of 90 matches in the year 2009.

John Tenta started his career as a Canadian wrestler in the WWF known as the “Earthquake.” Tenta went to Japan and entered a sumo stable in 1985 right after a match with a former yokozuna in Vancouver. He then became famous as a Western sumo wrestler in the 1980s. Although his professional career only lasted less than a year, he defeated all his opponents in all of his 24 bouts.

Konishiki was born and raised in Hawaii, carrying a peak weight of 287 kilograms (633 lbs) made him an alias “Dump Truck,” and “Meat Bomb.” He holds the record as the most massive sumo wrestler (with Yamamotoyama previously being Japanese-born sumo wrestler). Although he never achieved to reach the yokozuna rank, he had a successful career in the entertainment industry, appearing in film, radio, and television.

Rikidozan is born as Kim Sin-Rak in South Hamgyong, Korea, who moved to Japan to pursue a career as a sumo wrestler. He debuted in 1940 and faced massive discrimination for being a Korean wrestler in a Japanese traditional sport. He left sumo wrestling for another professional wrestling career in the year 1950. Rikidozan popularized professional wrestling in Japan and soon became the country’s biggest wrestling star. Unfortunately, Rikidozan was murdered by a Yakuza in 1963.

It is worth attending a sumo basho (tournament) at the time of your trip to Japan. The only problem is that the tournament only commences a few times a year. You have to plan your schedule to attend a basho. The basho happens six times each year in various locations in Japan. One way to experience sumo is by going to sumo exhibitions held in between tournaments. You can also visit a sumobeya, where the wrestlers live and train. It is where the famous sumo wrestlers progressed.

Another way to experience sumo is to attend a morning sumo practice. Lower-ranked wrestlers start early in the morning then followed by their higher-ranking colleagues later on. You should expect to sit on the floor in a sumobeya since it is a traditional space as you watch a massive wrestler do their morning ritual.

Everything You Need to Know About Olympic Betting
read more
Yuna TanakaJanuary 31, 2020
Table of Contents Difference Between Summer Olympics and Winter OlympicsOlympic ...