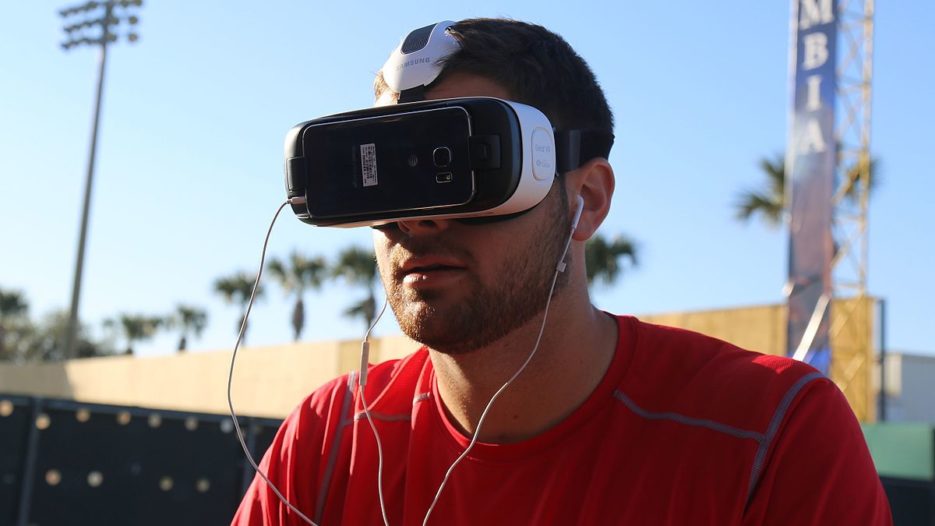 Practice makes perfect – this saying may be a cliché but it is true for athletes. They need repetitions if they want to be great at what they do. Some of the greatest sportsmen have given years of their life practicing to be at the level they are now and they don’t seem to stop. Practicing almost every single day can put a great toll on the body. Plus, they have to consider the weather and several governing rules should they need to practice. Thanks to technological advancements, these athletes can practice their skill anytime they feel like and anywhere comfortable for them.

With the use of an immersive virtual reality environment, these sports stars can improve their training programs just as they are on the court, field, course, or ice. They can have unlimited repetitions in an environment that is as close to the real one as possible so they can be prepared for their games, matches, and tournaments.

For several years now, coaches and trainers have used wearable technologies to monitor their athlete’s performance in real time. In Major League Baseball (MLB), there were approved wearable technologies that were approved to use in-game. The Motus sleeve, a biomechanic sleeve, Zephyr bioharness, measuring breathing and heart rate, which acts as a monitor for fatigue, and the Catapult. The Catapult gathers information from gyroscope, accelerometer, and magnetometer to measure the force and the turn of the body to identify the patterns of exertion and recognize the swings, throws, and sprints of the players.

Football players are not falling behind when it comes to wearable technology. They have also employed GPS devices placed on a player’s training vest to monitor their heart rate. They can also retrieve the data and get insight with regard to the distance the players can cover, including the distance during high intensity and the acceleration and deceleration during training or a match.

These wearable technologies have been crucial in monitoring real-time information about an athlete. Coaches and trainers need to gather this information to get to know their players better. The more they know about their players, the better they are in making decisions about who plays, who can substitute who, and even analyse whether they are at risk of having any injuries. They can also look at the areas in which the players can further improve on.

Other technologies that proved to be useful include hypobaric chambers commonly used by wrestlers and combat athletes to condition their cardiovascular systems as they train in low oxygen settings. These technologies give teams and club owners the advantage they need but they mostly focus on the physical aspect of the training. They lack the psychological component as most of the data from these wearable techs are not readily available to their players. Players, on a personal level, cannot benefit from these techs. Some athletes believe that their skill can be improved if they are invested in it. Sports is only 10% physical so a lot of it comes from their mental conditioning and psychological well-being. This psychological preparedness can be addressed by the use of virtual reality.

Athletes draw so much from their training. It is through training repeatedly that they can know their strengths and weaknesses. Simulating the environment, with real-life conditions, can help the athlete learn valuable information even before they go into the real environment. It gives them, sort of, a headstart into the playing field.

Training, for example, football allows the players to go against their teammates. The same individuals they have been training with for several days a week. Players already know the moves, strengths, and weaknesses, and playing styles of their teammates so everything becomes predictable. Some would even watch their opponents play on TV. This is far different when they eventually play against these teams during real-life matches.

Virtual reality changes all that. VR can help the players be in the game with their opponents. They can react to their opponent as if they are playing against them. Baseball players can analyse the complexities of his throw against an opponent. They can also practice on their level, analyse it, and make better improvements. Boxers can shadow box, run-through speed drills, and even master their reflexes.

The great thing about virtual reality is its customisation. It can be adjusted to a level or even personalize it to create a different scenario every single training. Virtual reality is also an extremely economical way of training athletes. For instance, race car drivers do not have to have an expensive car to practice their driving skills. They can save up in gallons of fuel, lessen the risk of injury, and even do not have to burn a lot of money when the car crashes.

How can virtual reality become successful in training athletes?

The beauty of virtual reality for sports training is its ability to make real muscle memory through visual cues. Something that athletes cannot get by simply watching their opponents from past matches. In virtual reality, they are placed in the heart of the experience. They can actively participate in the lessons and make adjustments at the same time.

Virtual reality training has had some success before. For one, US Alpine skier Mikaela Shiffrin bagged the Winter Olympics gold medal. Shiffrin is among the US Ski and Snowboard team who have used the VR training program from STRIVR as their preparation for the 2018 Winter Olympics in South Korea.

In STRIVR, individuals do reps by using a special headset and a 360-degree video to engage in several different scenarios and environments that they can see in real life. This setting allows athletes to train for high-risk sports without compromising their personal safety.

High-contact sports like the NFL can highly benefit from virtual reality. As you know, even a little mistake can cost someone’s career, especially for quarterbacks. With the use of VR, they can improve their reaction times and sharpen them.

Japan, in recent years, has become one of the front-runners in technology. They have managed to incorporate several tech into their everyday life, sports included. After their successful run during the Winter Olympics, they are already preparing for the 2020 Tokyo Olympics and Paralympics. During the Sports Business Expo Tokyo, about 630 companies participated and approximately 30,000 visitors attended to get first dibs on the latest in the sports technology.

A number of participants showed virtual reality as a means of preparing athletes. Lightz Inc. introduced an artificial intelligence system that simulates volleyball matches and even include emotional state based on the information given by their trainers.

Neuroscientists from the Nippon Telegraph and Telephone conducted a study about the use of virtual reality-based sports training in relation to baseball. The aim of the study is to prepare the athletes for their competition by subjecting them to game situations from their own point of view prior to an official game.

Virtual Reality in the Future

Virtual reality is slowly changing the landscape of sports. From training the athletes to even spectators watching the games. Early last year, the EAFF E-1 Football Championship, a soccer match among East Asian Football teams introduced virtual reality viewing. The federation worked with Fuji TV and LiveLike, a virtual reality company to create a VR application that has the capability to offer live-action and highlights during the soccer matches of Japan, China, North Korea, and South Korea. Electronic sports is also joining the tech game by utilizing virtual reality and augmented reality during matches.

More immersive technology, particularly in sports would give both the players and spectators something to always look forward to. Applying it to real life sports aside from video games is a welcome technological advancement that many sports enthusiasts can benefit.