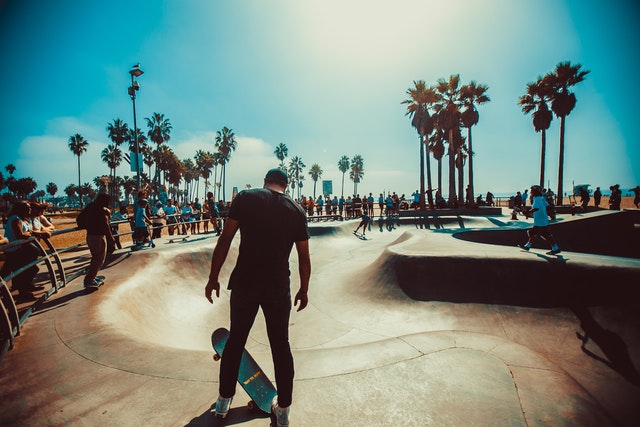 Skateboard has come a long way. What used to be a sport for leisure has become one of the most recent crazes in the gambling world. In case you don’t know yet, skateboard betting is a thing — and it’s getting enormous attention as of late.

Why is skateboarding betting a worthwhile “bet” to make at this time? It’s still new, and the competition isn’t as tough as other sports like basketball, baseball, and football. This means that there’s a high chance for you to cash in on your bets.

Before diving into the nitty-gritty of skateboarding betting, let’s first look at the evolution of this sport and how it became a hit among many bettors.

Skateboard first came into consciousness in the 1950s. It started in California by surfers who were looking for some activity they could do when they couldn’t ride the waves. It reached its popularity in the early 60s. Back then, it was only a fad with short-lived popularity.

However, about a decade later, improvements to the original wheels somehow increased its popularity. Urethane skateboard wheels with molded parts made the board easier to maneuver even over rough and uneven terrains. The wheels gave skaters better traction and performance, causing more of them to flock to urban spaces to perform tricks and show their skills.

Eventually, its popularity reached the UK market. It was mainly in demand among teenagers who were more than willing to import skateboards from US shops. During that time, it was hard to purchase a board with skateboard shops still far and few. Places to skate were much rarer.

Skateboard enthusiasts only had a few spots they could skate on. In fact, some skaters will even have to choose parks where they won’t be chased away.

Prohibition of skating was mainly due to safety issues since some skaters will primarily ride their boards and cause damage on curbs, stoneworks, stairs, benches, and other facilities on parks and plazas.

What makes skateboarding highly interesting is its participation in the cultural movement. During the 90s, skateboarding became one of the main activities at the height of hip hop and punk. Street skateboarding was extremely popular, and most board styles changed to accommodate the different tricks associated with freestyle skating.

By the early 2000s, skateboarding among 18 years old and below surpassed the number of those who played baseball. During this time, the sport was seen as an activity that could complement academic lessons. It was used as a non-traditional physical education program that can help students gain more discipline and confidence. It's also a good form of exercise that helps improve balance and coordination while strengthening muscles and bones.

Skateboarding is also viewed as an opportunity for the youth to develop social skills by teaching them social networking, mutual respect, collaboration, artistic expression, and respect for the environment.

Skateboarding made its debut in the Olympics during the 2020 Summer Olympics held in Tokyo, Japan. The International Olympic Committee approved its inclusion along with the other sports, such as sport climbing, surfing, karate, and baseball/softball. As such, skaters who participated in the event can now classify themselves as athletes.

Like any other sports in the Olympics, athletes must pass the qualifiers. For the 2020 Summer Olympics, skateboarding had 80 quota spots. Events had 20 competitors, 16 coming from the world rankings, three from the World Championships, and one from the host country. World Skate is the sole governing body for all sports using skating wheels.

Skateboarding during the 2020 Summer Olympics had four medal events. Each event consisted of two qualifying rounds, preliminaries, and finals. Both the Street and Park events had specially designed courses that factored in gender and stance to maintain equality.

Having the skateboard as part of the Olympics was not well-received by most. Many still think that competitive skating is something that has past its prime. But experienced wagers digress. Skateboard betting is one thing that will add flavor to the mix. And sportsbooks know this. That’s why they’ve added skateboard betting as part of their offerings. They know there is a market.

Skateboard betting means placing your bets on your favourite skaters as they take on the biggest and most complex skate parks. All this while enjoying the tricks they’re performing on their decks.

If you’re interested in skateboard betting, here’s what you should know:

In terms of legality, skateboard betting is a type of sports betting, and the same law applies to it depending on where you are. Often, the best bet is to place the wagers on online sports books.

While some offline bookies still exist, most of them do so underground. These underground bookies would often allow you to bet on a credit basis. This means you can place a bet and not pay upfront. However, often these transactions can get tricky.

Take this scenario: you bet on an underground bookie on credit. You’re often given a week to pay the money back if you lose. In these transactions, interests are unusually high, and this is where it gets dicey.

Given this, placing your bets online is much more advisable, and exploring payment providers that offer more flexibility depending on your needs.

There are tons of online casinos and sports books that accept bets for skateboard events. You can also explore gambling marketplaces where bettors and bookies march up. Take note that the platform would usually take 5% from the winnings.

There’s a market for skateboard betting, but only a few people are making bets. The action really starts as you get closer to the event and during the event itself. So if you’re considering placing your wagers on skateboarding, the best option is live skateboard betting. Often, the most significant bets would be on the Olympics.

In skateboard betting, odds calculation depends on the skater’s past performance. So bettors would have the most success by looking at the events of the skaters before joining the Olympics. It would also be best to compare their performances based on the different events, such as Park or Street. Some skaters are best in Street while others do better in Park skating.

Most bookies use algorithms to compute the best values to determine the odds. On top of past performances, do your homework about the personal activities of skaters, including their injuries and current form.

Where to Place Bets for Skateboard Betting

While there aren’t as many bookies for skateboard betting compared to others sports, it’s just a matter of time before all of the popular betting sites will accept bets for skating.

Here are some of the bets you can make for skateboard events:

Prop bet or proposition bet can either be player props or game props. The player prop entails betting on the skater’s performance, including how many tricks they can make during an event.

The game prop, on the other hand, means betting on something to happen during an event. This may include the first player to fall or do a specific trick.

Futures bet is another skateboard betting type that involves wagering on the outcome of the skating event. It can include who will win the gold medal or silver.

As mentioned, skateboard betting is often associated with live betting. This means all bets count when the event has already started. As such, odds can change depending on what actually happens during the event.

Top Skateboarders to Watch Out For

If you’re looking at skateboarding, here are some of the athletes you should keep an eye on:

Yuto Horigome was the first-ever skateboarder to clinch an Olympic gold medal. He finished with a 37.18 score, earning him the top spot in the men’s street competition. Horigome previously won three World Skate League events in 2018 and the X Games in 2019.

Nyjah Huston is an American skater who has competed since he was 16. He has won the most prize money. He placed 7th in the 2020 Summer Olympics, Men’s Street event.

Nishiya Momiji is a 13-year-old skater who won the first-ever women’s street skateboarding gold medal during the 2020 Olympic Games held in Tokyo.

Skateboard betting is still new, but it’s expected to make massive headwinds in the future as more and more countries provide ample facilities for skaters to practise their tricks.

Stay updated on the latest news about the skaters and events. This will help you be in the know on who to place your bets on.