Shuffleboard 101: How to Play and Win Big 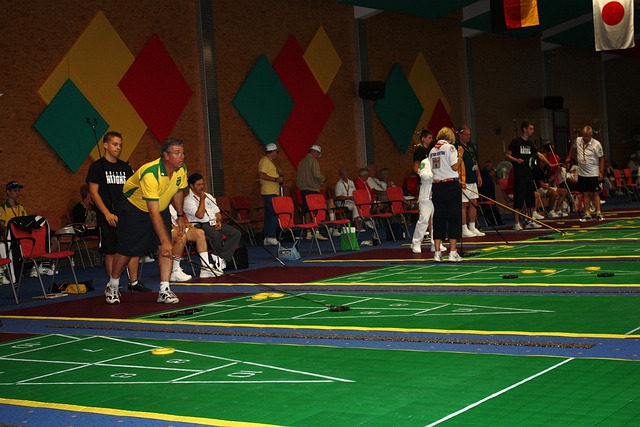 People invented many games for different purposes throughout history. The many games we people provide us entertainment, skills development, socialization, and even for gambling. One of the fun games invented was the shuffleboard.

This game became a pastime favourite in many parts of the world. People play this game and bring out the competitive spirits among players, a good party atmosphere, and applying advanced analytics. There are many more interesting things to know if you want to play shuffleboard. Read on and find the inspiration to play this cool game.

Shuffleboard is already popular in some places, and people enjoy playing the game to relieve their stress, relax, make new friends, and make some money on the side. More and more people are getting excited about trying to play this game because of its interesting features. To play, players need to “shove” pucks using paddles toward the target. The game also has many variants to play and alternative names such as shovel-board and deck shuffleboard. It also has similarities with other sports, such as air hockey and curling.

This game started as a table shuffleboard in 15th Century England and involved a simple coin sliding. The original shuffleboard puck was a great coin and became silver pennies, making the game more popular. Shuffleboard was known as shovel penny or shove, and it became a favourite leisure activity for young and older people. Many would play this indoor game in country estates and public houses in Winchester, Wiltshire, and Staffordshire.

English settlers brought shuffleboard to the United States, becoming popular in bars around the East Coast. But this game couldn’t gain its classy reputation back in England. People thought this game was an activity for sinners, and it also reached the court. Lawyers were unsuccessful in attempting to ban the game from bars around the state. Judges decided that it is a game of skill, not of chance, giving fair play to those who played shuffleboard.

People play with either two or four players. Two players would mean singles play, one versus one, while four players are doubles, two versus two. The game uses an outdoor court with dimensions 10 feet wide by 52 feet long. There are also different dimensions for indoor and portable courts.

Courts have scoring triangles at both ends, where players should stand six feet further toward the other end while playing. These triangles have point zones, 10 at their tip, nearest shots, then eight, and seven. The latter two contain a central division that creates a right and left area. The triangle’s base is the penalty zone.

Players use tang, a paddle-like stick, to hit the pucks (also known as biscuits) to play shuffleboard. They will try to position the puck towards the triangle for the best score. The tang has a maximum length of 6 feet 3 inches. The game starts with a toss coin to determine who will strike first. Players who strike first will use yellow biscuits, and the succeeding players will use black biscuits. The biscuits have a diameter of six inches and are not thicker than one inch.

Shuffleboard players will strike alternatively with their opponents and try to send more biscuits into the scoring zone. You need to know the mechanics of its scoring. A player or team can score only after striking all eight pucks and must be inside the scoring zone to count. If a puck touches only the line, it will not count.

Players can aim their shots at their opponent’s puck and try to remove it away from the scoring zone. There is also a 10 OFF zone where a player will have a deduction of 10 points as a penalty, and if the puck lands on the 10 OFF line, the player receives 5 points deduction. If a player’s puck goes outside the court, it will automatically deduct 10 points.

To win a shuffleboard game, a player needs to reach a target of pre-determined points or have the highest score after completing ten rounds, whichever comes first. People who play shuffleboard also experience having the same score of 75 points on the same turn. The player with the highest score in this situation will be the winner.

People will successfully play by following its rules. The shuffleboard game is about players taking turns in sliding all 4 pucks against the opponents’ weights. Players will try to earn the highest score by striking their pucks on the best scoring area without falling out of the court. Here are the basic shuffleboard game rules to follow:

Knock-Off shuffleboard is the most common way to play this game. Although it uses simple rules, playing the game is not easy. Players need to have patience, skills, and strategy to play.

Players can play Knock Off one-on-one or with two groups of two players. In playing with groups, one set of partners will position themselves at opposite ends of the court and stay there for the rest of the game. The team that scores 15 points first will be the winner of the game. If you want to play the game, you may opt for a race to 21 points.

The horse collar table shuffleboard has a high-scoring type of gaming. You can play this variation one-on-one or with teams, and the target is to race to 51 points. Horse collar is a challenge for people who want to play shuffleboard.

One-on-one matches will have players striking from the opposite sides of the shuffleboard court, while team partners can strike from the same end of the board. Teams and individual players use a set of coloured pucks, eight for one-on-one and four for groups of two players, which they will use to get the highest score.

Tap & Draw players who get to strike first will have the advantage in the game. It is similar to other types of shuffleboards, but the difference is that players can try to send their puck farther by hitting it using their other pucks.

Tap & draw shuffleboard is great for beginners against an experienced player. Players need to shuffle the pucks to the farthest scoring zone without touching or knocking any pucks off the court. The game would be complete if the team or player had their turns at the board, even if the one striking first already reached 51 points or more. If both teams have more than 51 points, the team with the highest score will be the winner.

Crazy eight is a variation comparable to classic games people play. It is a single game for two or more players and allows them to have an equal chance to play the game. Participants take turns alternatively at the ends of the shuffleboard court between frames, where individuals will use all eight red and blue pucks.

The game continues until an individual can score on an agreed number of points like 3, 15, 30, and other scores. The game will continue the grames until there is a winner. A player who scores first with the agreed points does not mean they are already the winner. All players will get an equal opportunity to finish the frame, and the one who scores the highest point similar to or more than the agreed points will be the winner.

If a player reaches a score equal to or more than the agreed minimum points will have the hammer (last player to strike) and shall be the winner. If the previous player has the same score as the prior player, another round will determine a winner.

Target table shuffleboard is like archery, rifler, and darts, which allows players to aim and shoot at their target. Players will try to score one, two, three, or four points using their skills to hit the target and win the game.

The variation is the same as the regular game, but it contains a target area for players to score points instead of foul lines. The objective of this game is to slide all four pucks against your opponents’ pucks and reach the scoring zone without falling off the court. Players will take turns striking all eight pucks, completing the turn.

More and more people wanted to play shuffleboard more for its fun and challenging mechanics. The game has wide varieties to make it more interesting for those who want to play. It needs skills and proper strategies to defeat other players. Many people also enjoy betting on shuffleboard and making money while watching a good match. Shuffleboard is an entertaining game for people young and old.